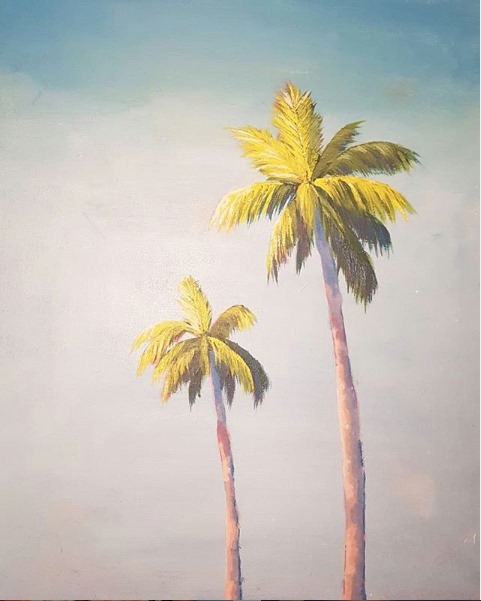 My niece sold her first painting. Well done Emily – hope you doN’t mind me putting it up. Now on to the shitty part of this post

Yep, we are under martial law and my pub is closed. I get it, the media is propagandizing like it is the end of the world and western populations live lives where any risk is unacceptable so we have given up every single liberty previous generations fought wars to get us. All I can wonder – doesn’t this seem like how America acted in Vietnam- Destroy the village to save it? How did that work out for everyone.

Why is it when people are afraid, they accept authoritarianism? Why do people who constantly spew about how wonderful western democracy is, how civilized the west is, how free it is suddenly start begging to have all liberties removed? When China locked down Wuhan and Hubei provinces, the media dramatically pointed out the dangers to the chinese population from this kind of control and tracking. Now these same media hucksters are proscribing the same thing for our countries? Surely these liberties are here for when we are in troubled times? Otherwise, it would seem these liberties are all a chimera and democracy and freedom is only window dressing and we all live in authoritarian countries with governments no different from China’s. After 9/11 you could not take a book out of a library without the book’s title and your name being put into some kind of secutity database. No flight lists stopped people from travelling. We weren’t allowed to bring a bottle of water on a plane. Of course these were temporary measures…still applicable 19 years later.

Was a lockdown inevitable? In January we were all told not to worry, COVID 19 was only in china?`Is that why there was no preparation in our countries? Why wasn’t there? Did we have to shut down our economy and endanger our future economic security because our establishment is incompetent at best and at worst just evil corrupt scumbags?We had plenty of warning this was a super contagious virus but all of countries did nothing to anticipate it spreading? These are the same incompetents/Scum bags we are all now relying on to be honest and to put people first after the crisis is over?

Everyone thinks that this pause to the economy will not hurt, that we will all get bailed out. As someone who has been briefed on loans, grants and salaries for my employees, we are all going to be hurt by this. Right now. governments and media will say anything to get you to go home – but when it comes time to collect, you can bet there will be a lot of disappointed people. IT IS IMPOSSIBLE TO BAIL EVERYONE OUT. Already, companies like Boeing and Deutsche Bank are making their plans to PROFIT from this crisis – not just survive like the rest of us. If big companies are expecting to profit from bailouts, how much do you expect to be left for small businesses, freelancers and employees? What the hell does COVID-19 have to do with the position Boeing or Deutsche bank are in anyway? Absolutely nothing but there they are first in line with their hat out.

Anyway, it is all a done deed now -i am living under martial law in Germany and hope it will end some time.  i hope all the guests of the four corners at least come out of this with their sanity, a semblance of economic health, and of course in good physical health. See you all for a pint if and when we get to the other side of this.

This entry was posted in Uncategorized. Bookmark the permalink.
« Condolences book
Fukushima »